An Epiphany From Tortellini Soup

We’re hosting the monthly gathering of Episcopal clergy tomorrow at The Church of the Good Shepherd.  We meet at lunchtime and our meal is handled in different ways: sometimes we bring a brown bag, sometimes something is ordered from a sandwich or pizza shop that delivers, and sometimes the host church prepares the food.

I was about to order a sandwich platter when I realized that today is a holiday and I wanted to spend some time in the kitchen.  I might as well prepare something for the gathering with colleagues.  But what?  We’re kind of a cozy group so some kind of cozy, comfort food might be in order, especially something that would be good for a cold winter day.

The first thing that came to my mind was Jerry's Tortellini Soup.  There’s a story behind that. 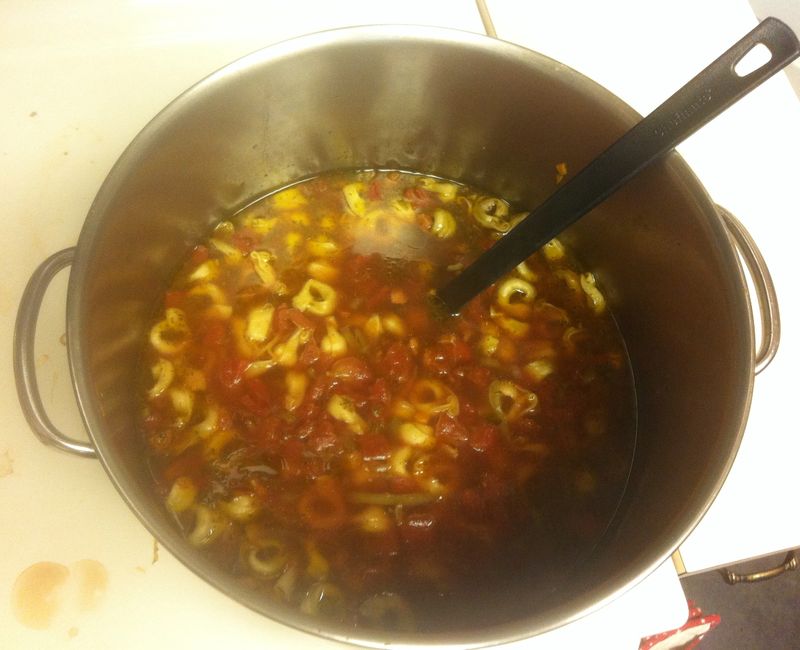 About this time in 1987, I came down with a horrible case of the flu.  Gay confined me to the house and that is where I stayed for a week.  Toward the end of that week, when my fever had broken, I was improving but was weak, bored, and had absolutely no appetite.

Our friend, Jerry Jones (the REAL Jerry Jones, not the owner of that Dallas football team) called to say he’d be dropping by with a pot of soup.  I was grateful but unsure what kind of soup would restore my faith in my poor, dead taste buds.

Jerry arrived and delivered the soup to the kitchen stove.  On his way out of the house, he said in his finest United States Marine tone of voice, “This is tortellini soup.  Heat it up, eat it, and you’ll be on your feet in no time. I left the recipe.”  With that, he was out the door and headed off on the next mission of mercy.  Semper Fi!

I followed Jerry’s instructions, heated up the soup, sat down at the table, and put a spoonful in my mouth.  Instantly, my dead taste buds were restored to life!  It was the first time in a week I had tasted anything. The flavor was amazing and I don’t think I’ve ever had any kind of “comfort food” that can equal that bowl of soup. It was an epiphany for me.

I cherish that recipe.  The soup and the act of kindness that brought it to me did indeed have me on my feet in no time.  And the flavor of both has remained with me all these years.  I love Jerry’s Tortellini Soup!  Whenever I prepare this soup, the memory his gift is rekindled in me.  I always hope that anyone who tastes it will detect the subtle flavor of the primary ingredients in Jerry's unwritten recipe – generosity, friendship, compassion, kindness, and love.  Those are the ingredients that make Jerry’s Tortellini Soup such a healing concoction.

I love to share it with others and always do so in the spirit of Jerry, one of the world’s finest examples of a faithful friend and brother in Christ.  Semper Fi, Jerry!

P.S.  I have developed a vegetarian version of this soup, which will be available tomorrow.  The meat is omitted, but not the primary ingredients!

Posted at 01:25 PM in Church of the Good Shepherd, Episcopal Church, From the Rector, Lexington, Meditation, Religion, Theological e-piphanies | Permalink

I love the story of the soup, but cannot find the recipe...