Today we remember those who gave their lives in the service of their country. Their sacrifice contributed to the preservation of our national life and, in many cases, the peace and security of other nations. Whether they enlisted or were compelled to serve does not matter. When human beings failed to resolve conflicts by other means, their lives were set apart and sacrificed in the service of their contemporaries and future generations of Americans. That is why we consider their memories sacred.

We denigrate their sacrifice when we take our liberties for granted or use them in self-serving ways. We cheapen their sacrifice when we tolerate people seeking and holding public office using freedom to propagate misinformation and disrespectful behavior to advance any interest. We disrespect their sacrifice when we allow oppression, marginalization, and persecution of members of our society. Every time a member of the American military dies in the line of duty, the value of those freedoms increases and the more determined our generation must be to find more effective ways to wage peace. The government we elected sent them into harm's way. We ignore their sacrifice when we do not insist that our government provide adequate services for the families they leave behind as well as for their comrades who return from the field and their families. That is costly, but it is part of the cost of making war. Hard-won liberties must be exercised responsibly and protected daily by each one of us. That is costly too, yet it is the price of making peace.

When we even glance at human history, it is pretty clear that warfare is the result of somebody wanting something that is not theirs, somebody else defending what is, and utter failure to find a peaceful resolution to the conflict. Memorial Day is not a time to glorify warfare. It is a time to mourn those whose lives were cut short by the failure of humanity to fulfill our God-given potential for living in ways that make wars unnecessary. Christians, Jews, and Muslims, in particular, have yet to set an enduring example for peacemaking for the rest of humanity. While we have been given the vocation and the teachings to bring peace and lasting freedom to the rest of the world, we have listened to other voices and followed other precepts.

Central to the message of the Bible is the belief that Almighty God created human beings to live in freedom. Just as central to the message of the Bible are examples of how people acting in the Name of God thought combat was the way God wanted to accomplish the liberation of humanity. Jesus repeatedly confronted whatever interfered with freedom and he paid the ultimate sacrifice to secure that freedom for all people in all times. His own disciples had difficulty understanding that he was instituting a kind of liberty that could not be won by warfare but, if embraced, could make wars to cease forever. St. Paul summed it up for those early Christians in the Roman province of Galatia. He wrote to them in their own unique context, but his words are universally applicable: “For freedom Christ has set us free” (Galatians 5:1). 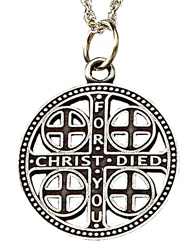 Peace and freedom for humanity are God’s desire. Christ came to secure the reign of peace and freedom. You and I are called to live our lives in harmony with God’s reign and God’s desire. We have to learn to so effectively wage peace, with God's help, that warfare will become obsolete. "It is God who makes war to cease in all the world; God breaks the bow, and shatters the spear, and burns the shields with fire" (Psalm 46:10). Can we trust God enough to join God in making war to cease?

I submit to you on this Memorial Day that whenever we are faced with opportunities to wage peace instead of war – in our homes, our families, our communities, our nation, or across international boundaries – we stand upon the shoulders of all those who have died in military operations and under the protection of the Savior of the Nations, Jesus Christ, who died and rose again so that all people in all times might live in peace and freedom. So, I commend two prayers from The Book of Common Prayer for your use today as we remember those brave women and men and as we renew our commitment to the One who calls each of us to participate in the divine peacemaking initiative.

O Judge of the nations, we remember before you with grateful hearts the men and women of our country who in the day of decision ventured much for the liberties we now enjoy. Grant that we may not rest until all the people of this land share the benefits of true freedom and gladly accept its disciplines. This we ask in the Name of Jesus Christ our Lord. Amen.

O God, the author of peace and lover of concord, to know you is eternal life and to serve you is perfect freedom: Defend us, your humble servants, in all assaults of our enemies; that we, surely trusting in your defense, may not fear the power of any adversaries; through the might of Jesus Christ our Lord. Amen.