Why Blue for Advent?

The Season of Advent 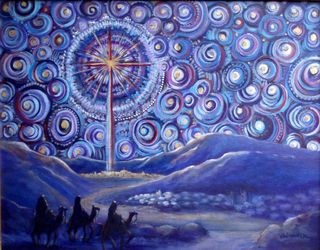 The word “Advent” is derived from the Latin Adventus, which means “coming” or “arrival.” It is the season of preparation for the celebration of the Birth of Jesus Christ, God’s Messiah. Advent has been observed in the Western churches, since about the fifth century C.E.. Advent begins the liturgical year and includes the time from the fourth Sunday before Christmas, until Christmas. The first Sunday of Advent is always the Sunday nearest the feast of St. Andrew the Apostle, November 30th, and always falls between November 27th  and December 3rd.

The Color for the Season

For centuries, the season of Advent was observed as a penitential season. Sometimes, it was even referred to as the “Little Lent.” And, following the pattern of Lent, the designation of the four Sundays of the season were Sundays “in” Advent rather than Sundays “of” Advent. Also, as in Lent, the color violet or purple was the seasonal color.

During the ecumenical liturgical reforms of the 1960’s and 1970’s, a strong consensus emerged that Advent should be a season of hope and anticipation, rather than penitence. As the new lectionaries were developed, the Sunday readings reflected those themes. Many churches sought a different seasonal color. Liturgical leaders were drawn to the color blue, which was used in the ancient Sarum rite (Salisbury, England). In subsequent years, use of the color blue has become widespread during Advent. Blue symbolizes hope, confidence, anticipation and expectation, all adjectives that describe the season of Advent.

Use of the Advent Wreath entered our observance of the season during the last century. The wreath 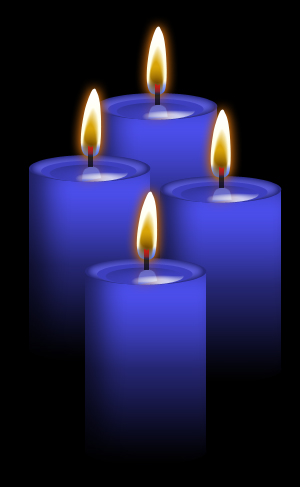 consists of four candles, one of which is lighted on each of the four Advent Sundays. As the days grow shorter and the nights grow longer, we light more candles until we celebrate the birth of the Light of the World on December 25, symbolized by a larger white candle in the center of the wreath.

When purple or violet was the seasonal color, that was the choice of color for the hangings, vestments, and Advent Wreath candles. However, rose, a lighter shade of purple, was often used on the third Sunday.  Rose was thought to be representative of a less penitential theme for that Sunday, on which the first word of the Introit was “Rejoice.” Now that Advent is no longer observed as a primarily penitential season, the candles are blue and there is no need for a rose candle to suggest that we  “lighten up.”

I invite you to take time in this season of Advent to prepare your heart and mind in new ways for the news of the birth of Jesus Christ, God With Us.