What's that strange ceremony all about?

The covenant narrative found in Genesis 15:1-18 gives us a rare glimpse into some of the liturgical practices of the ancient patriarchs and an insight into how they understood their relationship to God. The story describing a covenant and the ceremony that sealed it was passed down through oral tradition for several generations before it was written in the form we read today. 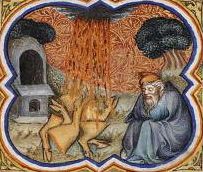 The story begins with a visit from God to Abram. The patriarch's name has not yet been changed to Abraham. The encounter is set in the context of a vision and later a deep sleep. God tells Abram that he is favored and will receive a great reward. Abram is concerned because he does not have a natural heir. Nevertheless, God promises Abram that he will not remain childless and that his descendants will be as numerous as the stars.

Abram trusted God's promises (“believed the LORD”) and because of that he was considered to be in a right relationship with God (“righteous”). St. Paul later uses Abram as an example in his explanation of "justification by faith" in Romans 4:3. In fact, for Paul, Abraham is the paradigm of justification.

The verses that follow deal, not with sacrifice, but with an obscure covenant ceremony called the “cutting of the covenant.” Animals were killed and their carcasses were split in half. The person or persons involved in the ritual would walk between them and curses were called down if the covenant was not honored. The images of a flaming torch and a smoking fire pot are symbols of the divine presence, reinforcing the belief that God was confirming the covenant.

God always initiates the covenant and our role is one of response. A covenant differs from a contract in that both parties to a covenant are bound to uphold their promises even if the other party does not. The story of the People of God is the story of God's faithfulness in the face of our unfaithfulness. Instead of cursing us, God comes to us and calls us back into a right and just relationship.

Ultimately, God's most profound act was to make covenant with the world through Jesus, though St. Paul makes it clear in Romans 9-11 that the new covenant does not take the place of the old one - it expands it. The Abrahamic Covenant was initiated for the benefit of Abraham and his descendants, who would be used by God to bring blessings to others. It is still valid. “For the gifts and calling of God are irrevocable” (Romans 11:29). The Christ Covenant was initiated for the world and for all people, including you and me.

We don't carve up animals and pass through the carcasses with smoking fire pot and flaming torch. Instead, the covenant ceremony for us is Holy Baptism, in which we are joined to Christ in his death and resurrection, sealed by the Holy Spirit, and “marked as Christ's own for ever.”

I hope this reflection will help us prepare for the renewal of the Baptismal Covenant at the Great Vigil of Easter.