This will reach you during The Week of Prayer for Christian Unity. This annual observance always begins on January 18, the Confession of St. Peter, and continues until January 25, the Conversion of St. Paul.

Once we thought Christian unity meant all Christians should be organized into one big church. Today’s approach is summed up in a Latin phrase, In necessariis unitas, in dubiis libertas, in omnibus caritas, commonly translated as “unity in necessary things; liberty in doubtful things; charity in all things.” The phrase has often been attributed to 4th century bishop St. Augustine of Hippo, but has also been attributed to 17th century Croatian Bishop Marco Antonio de Dominis as well as English author and Puritan Richard Baxter of the same era. Regardless of who said it, it is worthy of contemplation as we pray and work for Christian unity.

St. Paul writes to the Corinthians, “I appeal to you, brothers and sisters, by the name of our Lord Jesus Christ, that all of you be in agreement and that there be no divisions among you, but that you be united in the same mind and the same purpose” (I Cor. 1:10).

I wish other groups of Christians could know the kind of unity that exists in our Cathedral community - an inviting unity of heart, mind, and purpose that is in contrast to the day-to-day conflicts that plague us. This unity is not based on agreement in everything, but is similar to what St. Paul described in another message he sent to the Ephesians, “I therefore, the prisoner in the Lord, beg you to lead a life worthy of the calling to which you have been called, with all humility and gentleness, with patience, bearing with one another in love, making every effort to maintain the unity of the Spirit in the bond of peace. There is one body and one Spirit, just as you were called to the one hope of your calling, one Lord, one faith, one baptism, one God and Father of all, who is above all and through all and in all” (Eph. 4:1-6). 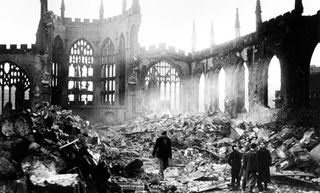 On November 14, 1940, much of the City of Coventry, England was reduced to rubble by German bombs. The Cathedral Church of St. Michael and All Angels, at the heart of the city, burned with it. In the terrible aftermath that followed, Provost Howard wrote the words “Father forgive” on the smoke-blackened wall of the sanctuary. Two of the charred beams that had fallen in the shape of a cross were set on the altar and three of the medieval nails were bound into the shape of a cross. The people of Coventry found the grace to overcome the anger they felt toward their enemies who destroyed their Cathedral and almost destroyed their entire city.

After the war, they decided to share that grace with others. Crosses of Nails were presented to Kiel, Dresden, and Berlin, cities shattered by Allied bombing.  Out of those ashes grew a trust and partnership between Coventry and the German cities. The Community of the Cross of Nails came into being. There are now 200 Cross of Nails Centres around the world, including our own Saint John's Cathedral, all of them emanating from this early, courageous vision, and all working for peace and reconciliation within their own communities and countries. The Cross of Nails has become a powerful and inspirational symbol of reconciliation and peace.

The original Cross of Nails is now incorporated in the cross on the new Cathedral’s High Altar. The twisted arms of the High Altar cross symbolize the charred timbers from the roof of the original Cathedral, which were made into a cross to replace the original High Altar cross. The nails and twisted arms also symbolize Christ's suffering on his Cross. The Cross of Nails that was presented to Saint John's years ago normally resides in the clergy vesting room. I've asked that it be on public display in the Cathedral during this Week of Prayer for Christian Unity.

Give thanks to God for our unity and pray that we will be a light to others who seek oneness in Christ. Every shining example of a community of Christians living into the oneness for which our Savior prayed is part of the answer to his prayer “that they all might be one” and all prayers for unity among all God's children.