A Call to Prayer for All People

Next week on May 9, we celebrate the 81st anniversary of the dedication of the Richard Howard Green Memorial Chimes in the West Tower of St. Andrew’s Cathedral. There are eleven bells in this set, the largest weighing 1,685 pounds and the smallest weighing 125 pounds. They were cast by the Old Meneely Bell Foundry of Watervliet, New York in 1936 specifically for our Cathedral. The bells were installed in 1937.

An inscription is cast on the Great Bell. It reads, “To the Glory of God / And for call to prayer for all people / The Gift of / Richard Howard Green, Junior Warden / Entered into Rest October 1, 1936.”

These bells are a part of the historic richness of Downtown Jackson, Mississippi. They chime the hour and play a tune several times a day as well as on special occasions.

Beginning this Sunday, we will resume the custom of beginning worship services in the Cathedral by ringing one of these bells. Following the Prelude, when you hear the bell, it signals that it is time to stand for the singing of the Processional Hymn. 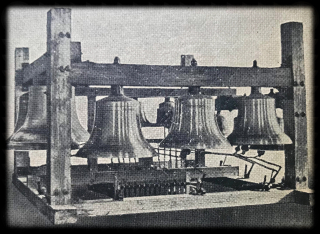