« A Call to Prayer for All People | Main | Deep Breathing Exercises » 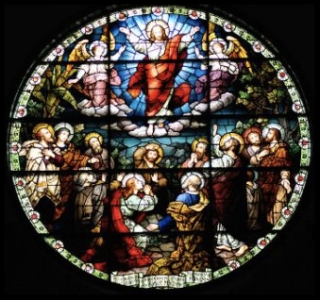 We are in the days leading up to the Day of Pentecost and in a period sometimes known as Ascensiontide. The Ascension (Luke 24:44-53  / Acts 1:1-11) is probably not the best known of the feast days on the calendar, but it is one that takes on increasing depth and importance the more you think about it and experience it.

The Ascension is not about gravity, or the physical location of heaven, or any of that. It is about God.  In fact, even though it comes toward the end of Eastertide, the Ascension is most closely related in meaning to Christmas. At Christmas we celebrate the Incarnation, God becoming flesh and living among us.

So we are able to approach God with confidence and with joy. Because we are not only dealing with the Creator of the universe and the Sovereign of all time and of eternity; we are also drawing near to the One who lived our life, has shared our fate, who knows us, and cares about us.

P.S. You just can't beat Charles Wesley when you need a hymn for an occasion like Ascension Day!  Here's  the Choir of Tewkesbury Abbey singing his rousing hymn Hail the Day That Sees Him Rise. (Be patient, the audio file loads slowly.)

Posted at 06:45 AM in Diocese of Mississippi, From the Interim Dean, Jackson, Mississippi, St. Andrew's Cathedral, Theological e-piphanies | Permalink