« The Message of Love | Main | Every Member Has a Ministry! »

Next Sunday's gospel is Luke 5:1-11. It is the story of Jesus' encounter with Simon, James, and John on the shore of Lake Gennesaret (the Sea of Galilee). You might want to read the story here to refresh your memory of their miraculous catch of fish and how Jesus told them they would be catching people.

The Greek word zogron, which means “catching,” was commonly used of teachers: they “caught” their students and brought them new life. I remember an occasion at dinner with friends when my wife, Gay, who was a high school English teacher, was talking about a new data projector she had been issued by her school. It was a somewhat novel thing at that time. She explained how she could project a movie on an entire classroom wall for the students to watch and she described their response to a movie she wanted them to see. One of our dinner companions exclaimed, “You caught them!” That is what Jesus means when he says to Simon, James, and John, “don't be afraid; from now on you will be catching people.”

The sense in which the followers of Jesus are called to “catch” people has to do with inclusion in a redemptive, prophetic, community of faith. We are woven into a network. My salvation and yours are connected. My part of Christ’s mission and yours are tied together. When we are called into a relationship with Jesus Christ, we are called into life in Christ's community. We are woven into a network through our Baptism and cast out into the world to “catch” people with the love of God.

Someone has said, “Christianity is more easily caught than taught.” Another person expressed it like this, “We belong before we believe.” Our life and witness as disciples, students, followers of Jesus Christ is not done in isolation either from Jesus or from the community of faith. 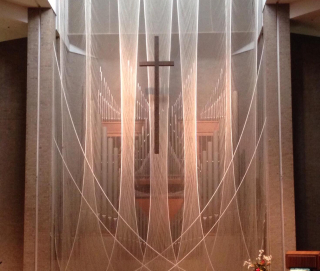 The First Baptist Church of Austin, Texas is remarkable for its progressive faith and its architecture. It is one of the few Southern Baptist Churches with the pulpit on the side instead of in the center. A large communion table sits in the center, surrounded by seats. Rising above the table in a recessed area are about four stories of organ pipes. And draped in the opening in front of the pipes are two enormous fish nets. I don't know that I've ever seen a more powerful reminder of the network of disciples Jesus has called to carry on his work in the world.

As we live and grow in our relationship with him and with one another, we are woven into this amazingly strong and reliable net that the Lover of our souls casts out into the world so that his love manifested among us may catch others, draw them in, and give them life. This net really works!

In the next few days, we are going to extend an invitation to become involved in the network of disciples at St. Andrew’s Cathedral. We are hoping some will continue in the places of service in which they are now engaged. Some may feel called to some place of ministry that is new to them. We are also hoping some who have not been involved will respond to the invitation by finding a place of service. Watch for the invitation and let us know how you believe you are called to be woven into this Cathedral net to ensure that it continues to work on behalf of Christ’s mission in the world.