When You Are in a Storm

Jesus has just finished a long day of teaching. He has taught the parables of the sower, the growing seed, the mustard seed, and explained the need for parables to his disciples. He is exhausted from his work and he wishes to sail from the Jewish territory of Galilee to the Gentile region of Gerasenes on the other side of the Sea of Galilee. (Mark 4:35-41)

The Sea of Galilee is really a lake. It is thirteen miles long and eight miles wide and is located on an ancient trade route linking Egypt with Syria and Mesopotamia. Towns founded by Greeks, Romans, and many others flourished in the region and there was a thriving fishing industry there. Although the lake continues to provide an abundance of fish, most of the ancient towns have long since been abandoned. But in Jesus’ time, people from all over the Roman world would have traveled through Galilee on their way to other places. It figures prominently in the stories of Jesus that have been handed down to us in the gospels.

On the occasions Mark tells us about, all of the disciples of Jesus are on board. At least four of them are fishermen. Jesus finds a cushion and goes fast asleep in the rear of the boat. As local fishermen, Peter, James, John, and Andrew would have been quite familiar with the lake’s unpredictable weather, including violent storms, and how to handle it. That they panic and wake Jesus up from what was probably a much-needed nap shows that this particular storm was especially intense.

The storm has pushed them to their limit. In spite of their knowledge of boats and the Galilean weather, their boat is sinking. In desperation, they wake Jesus, to warn him that his own life is in danger and because they had nowhere else to turn. Their question, “Don’t you care that we’re drowning?” is also a desperate cry for help. They wanted to be out of the danger so they called out to Jesus. They’d seen him do other miracles. Maybe he could deliver them from this perilous situation.

Their reaction to Jesus’ response indicates that it was not what they expected. This act of control over the elements of sea and sky stunned them. Only God has such power! In an instant they are removed from the life-threatening situation and brought to a new place, to a place not just of safety, but also of understanding, even if they cannot yet fully comprehend what is happening.

How many times in life do we find ourselves in a “storm” beyond our ability to handle? When we reach our limits trying to handle the situation, we simply want out of it. And when it becomes desperate enough, we often find ourselves crying out to Jesus, “Don’t you care that we’re perishing?” 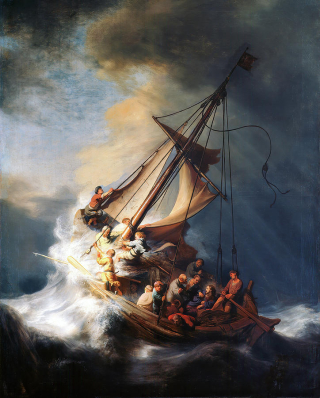 Rembrandt’s Painting Storm on Galilee depicts that scene from Mark’s Gospel. In the painting, each disciple faced his fears in his own way. Two go to wake Jesus – maybe he can do something. They are looking at Jesus in anger. One struggles to hold on to the tiller, five wrestle with the sails. One hides in the rigging and one in the bottom of the boat. One is crouched over in dread and one is sick. There is also one who is kneeling in front of Jesus. If you have been counting, you’ll realize Rembrandt put thirteen – not twelve – disciples in the boat with Jesus. The extra man, the one who is kneeling, looks very much like Rembrandt! The artist puts himself in the same boat with the frightened disciples – as a stand-in for us.

“Why are you so afraid? Do you still have no faith?” Jesus asks. Because we are human, we struggle with our fears and our limits just as the disciples did. Yet, if we remain open to the unexpected, Jesus will “handle it.” And, in spite of our doubts, fears, and lack of faith, he by whom and with whom all things were created, the One whom the wind and waves obey, will bring order out of the chaos that threatens us as well. Who knows? Maybe his solution won’t be an obvious one. Maybe he’ll even make us a part of his solution and a part of his answer to our own prayers.