Holy Saturday and Christ's Descent Among the Dead

While searching for some commentary regarding Holy Saturday, I came across reflections posted by The Rev. Canon Patrick Comerford on his blog. Comerford is a priest in the Church of Ireland (Anglican), Director of Spiritual Formation at the Church of Ireland Theological Institute, and a Canon of Christ Church Cathedral Dublin. While Canon Comerford’s message concerns All Souls Day, a significant portion of it has to do with Christ’s descent to the dead, also known as “The Harrowing of Hell” and that is the excerpt I have chosen to share with you on this Holy Saturday.

Before you read the excerpt, I suggest reading the following passages of scripture: 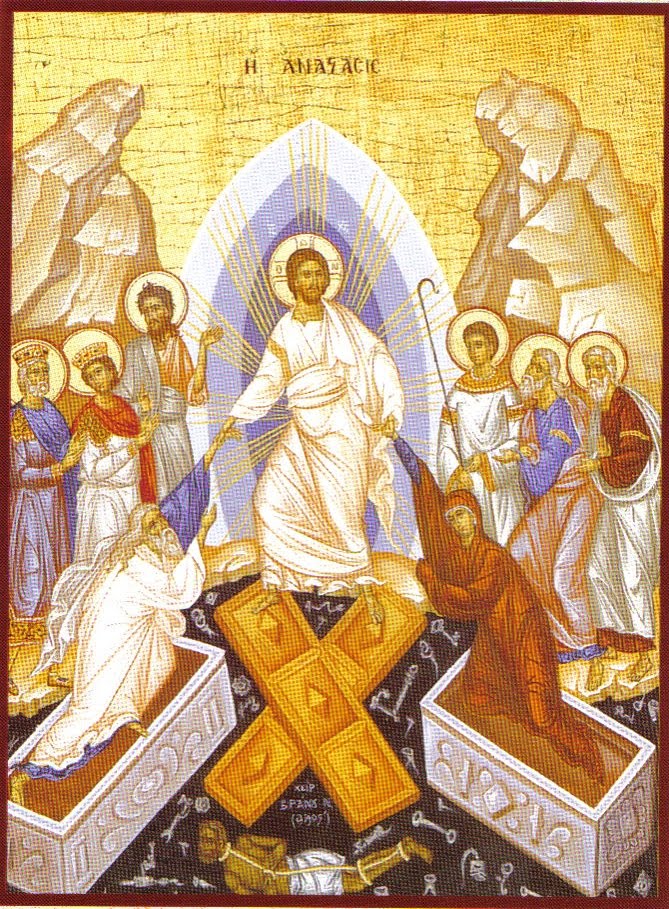 Here is the excerpt from Canon Comerford’s blog:

In the Eastern Orthodox tradition there are several All Souls’ Days throughout the year, especially on Saturdays. Saturday is the day Christ lay in the Tomb, and so all Saturdays are days for general prayer for the departed.

The Western tradition of the Church has traditionally contemplated the cross, and then the empty tomb … and has been totally agnostic about what happened in between, between dusk that Friday afternoon and dawn that Sunday morning. The deep joys of the Resurrection have often been overshadowed in the Western Church by the Way of the Cross, as though the Cross leads only to death. We have neglected Christ’s resting place, his tomb, and given little thought to what was happening in the Holy Sepulchre that holy weekend.

The Eastern Churches, which lack a clearly defined doctrine of Purgatory, have been more comfortable with exploring in depth the theme of Christ’s Harrowing of Hell. For, while Christ’s body lays in the tomb, he is visiting those who were dead.

The icon of the Harrowing of Hell reminds us that God reaches into the deepest depths to pull forth souls into the kingdom of light. It reminds us how much we are unable to comprehend – let alone take to heart as our own – our creedal statement that Christ “descended into Hell.”

The Apostle Peter tells us that when Christ died he went and preached to the spirits in prison “who in former times did not obey … For this is the reason the Gospel was proclaimed even to the dead, so that … they might live in the spirit as God does” (I Peter 3: 15b- 4: 8).

The Early Church taught that after his death Christ descended into hell and rescued all the souls, starting with Adam and Eve, who had died under the Fall. The Harrowing of Hell is intimately bound up with the Resurrection, the Raising from the Dead, for as Christ is raised from the dead he also plummets the depths to bring up, to raise up, those who are dead, no matter where that may be in time and in space. The Harrowing of Hell carries us into the gap in time between Christ’s death and his resurrection.

In icons of the Harrowing of Hell, Christ stands on the shattered doors of Hell. Sometimes, two angels are seen in the pit binding Satan. And we see Christ pulling out of Hell Adam and Eve, imprisoned there since their deaths, imprisoned along with all humanity because of sin. Christ breaks down the doors of Hell and leads the souls of the lost into Heaven. It is the most radical reversal we can imagine. Death does not have the last word, we need not live our lives buried in fear. If Adam and Eve are forgiven, and the Sin of Adam is annulled and destroyed, who is beyond forgiveness?

In discussing the “Descent into Hell,” Hans Urs von Balthasar argues that if Christ’s mission did not result in the successful application of God’s love to every intended soul, how then can we think of it as a success? He emphasises Christ’s descent into the fullness of death, so as to be “Lord of both the dead and the living” (Romans 5).

However, in her book Light in Darkness, Alyssa Lyra Pitstick says Christ did not descend into the lowest depths of Hell, that he only stayed in the top levels. She cannot agree that Christ’s descent into Hell entails experiencing the fullness of alienation, sin and death, which he then absorbs, transfigures, and defeats through the Resurrection. Instead, she says, Christ descends only to the “limbo of the Fathers” in which the righteous, justified dead of the Old Testament waited for his coming.

And so her argument robs the Harrowing of Hell of its soteriological significance. For her, Christ does not descend into Hell and experience there the depths of alienation between God and humanity opened up by sin. She leaves us with a Christ visiting an already-redeemed and justified collection of Old Testament saints to let them know that he has defeated death – as though he is merely ringing on the doorbell for those ready to come out.

However, Archbishop Rowan Williams has written beautifully, in The Indwelling of Light, on the Harrowing of Hell. Christ is the new Adam who rescues humanity from its past, and who starts history anew. “The resurrection … is an introduction – to our buried selves, to our alienated neighbours, to our physical world.”

He says: “Adam and Eve stand for wherever it is in the human story that fear and refusal began … [This] icon declares that wherever that lost moment was or is – Christ [is] there to implant the possibility … of another future.” [Rowan Williams, The Dwelling of the Light: Praying with Icons of Christ, p. 38.]

I ask myself: what’s the difference between the top levels of Hell and the bottom levels of Hell? Is my Hell in my heart of my own creation? In my mind, in my home, where I live and I work, in my society, in this world? Is hell the nightmares from the past I cannot shake off, or the fears for the future when it looks gloomy and desolate for the planet? But is anything too hard for Lord?

The icon of the Harrowing of Hell tells us that there are no limits to God’s ability to search us out and to know us. Where are the depths of my heart and my soul, where darkness prevails, where I feel even Christ can find no welcome? Those crevices even I am afraid to think about, let alone contemplate, may be beyond my reach. I cannot produce or manufacture my own salvation from that deep, interior hell, hidden from others, and often hidden from myself.

But Christ breaks down the gates of Hell. He rips all of sinful humanity from the clutches of death. He descends into the depths of our sin and alienation from God. Plummeting the depths of Hell, he suffuses all that is lost and sinful with the radiance of divine goodness, joy and light.

Hell is where God is not; Christ is God, and his decent into Hell pushes back Hell’s boundaries. In his descent into Hell, Christ reclaims this zone for life, pushing back the gates of death, where God is not, to the farthest limits possible. Christ plummets even those deepest depths, and his love and mercy can raise us again to new life.

[Today], we think again of Christ in the grave, and ask him to take away all that denies life in us, whether it is a hell of our own making, a hell that has been forced on us, or a hell that surrounds us. Christ reaches down, and lifts us up with him in his Risen Glory.

May these thoughts from Canon Patrick Comerford be an epiphany for you on this Holy Saturday. Here's a Charles Wesley hymn that also seems fitting for today.

Tags: Descended to the Dead, Gates of Hell, Harrowing of Hell, Holy Saturday