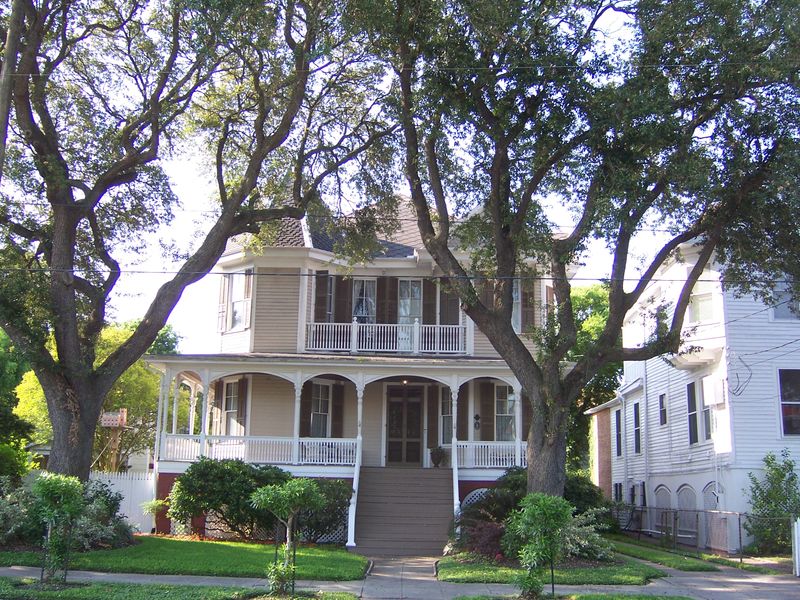 From August 1999 until October 2012, we owned this amazing Queen Ann Victorian house in Galveston, Texas.  Here is the story.  Be sure to visit the photo album.

In 1894, R. Waverly Smith purchased land on Avenue O from Robert I. Cohen.  The present owners are in possession of the original title policy issued in that sale and signed by Maco Stewart, founder of Stewart Title Company.  R.W. Smith was a well-regarded young lawyer who became City Attorney and eventually became president of the First National Bank of Galveston.  He played an important role in the development of the commission form of government for Galveston following the disastrous hurricane of 1900.  In September 1896, he married Jennie Sealy, the daughter of John Sealy.

During that same year, construction was begun on this wood frame Queen Ann style house.  The house was designed and built by Galveston architect George B. Stowe.  During the construction, the Smiths lived with the bride’s mother, Rebecca Sealy, on the corner of Tremont and Sealy.  When Rebecca Sealy died in 1897, the Smiths remained in the Sealy home, sharing it with the bride’s brother, John Sealy II, and rented the home on Avenue O.

The house survived the 1900 Storm and in 1903, R. Waverly Smith sold it to Henry K. and Minerva Rowley.  As part of the grade raising after the 1900 Storm, the house was elevated an additional three and one-half feet and the carriage house was raised four and one-half feet.  Mr. Rowley was an employee of thee Union Pacific Railway.  Members of the Rowley family lived in the house for the next 51 years.  Mr. and Mrs. Rowley and their only son, William, died during the influenza epidemic of 1917-1918, leaving the home to their two daughters, Frances Rowley, a physician and specialist in diseases of the eyes, ears, nose, and throat, and Medora Rowley, an artist.

Upon the death of Medora Rowley in 1954, the house was left to trusted friends, Mrs. Robert Townsend and Mrs. E.P. Russell.  Mr. and Mrs. Townsend then purchased Mrs. Russell’s interest in the property and made it their home.  Renovations by the Townsends included a new roof, closing in of the first and second story back porches to provide additional rooms, and the construction of a new three-car garage to replace the decrepit carriage house.

After several other owners, the house was purchased in 1979 by Dr. and Mrs. Edgar Ben Smith.  Dr. Smith was head of the Department of Determatology at U.T.M.B.  In 1999, at the time of his call to be rector of Trinity Episcopal Church, The Reverend and Mrs. Ronald D. Pogue purchased the house from the Smiths, who moved to Albuquerque, New Mexico.

Many of the original interior fixtures of the house have been maintained through the years.  Of particular interest are the carved mantles and the original brass light fixtures.    The paneling in the entry and the wainscoting throughout the house are made of longleaf pine and contribute s faint but distinct scent to the rooms.  Note that  the ceiling fixtures in the front parlor and dining room are gasoliers and were originally capable of providing light with either electricity or illuminating gas.

At the top of the front stairway are bedrooms.  Note the unusual configuration of the rooms due to the bows in both bedrooms and the additional bay window in the west bedroom.  The original bathtub, mirror, and marble vanity can be seen in the upstairs bathroom, which opens into the central hallway.  As you proceed toward the back of the house, the master bedroom opens off the hallway on the left.  The former upstairs back porch has been converted into a roomy bathroom with two lavatories, shower, and whirlpool tub.  The fourth bedroom is used today as a guestroom and has a staircase leading up to the attic, which is floored.

After descending the back staircase, you will enter the kitchen, which was modernized in the early 1970’s.  Pass through the kitchen to the one-time back porch, which is not the den.  As you pass through the hallway toward the front of the house, you will note on the left the utility room (formerly the pantry and storeroom) and the small downstairs bathroom resulting from the conversion of an area that was originally a closet or staircase.  On the right are the dining room and the front parlor, each with its own coal burning fireplaces.  There are functional jib windows leading from these two rooms onto the verandah where fresh Gulf breezes are felt.  The house originally had nine jib windows, seven of them opening onto upstairs balconies.  The above ground basement is enclosed and has a concrete floor.

A photograph of the Pogue’s Christmas Tree was featured in the December 2000 issue of Victorian Homes magazine.  In 2004, the Pogue’s engaged Dale Thwing and Signature Design Group of Houston to assist them in restorations to the interior design of the house.  The pine floors were refinished and the downstairs woodwork was restored to its original natural finish.  Upstairs woodwork was painted with white enamel.  Window coverings and upholstery for most of the interior were created by Thwing.  These restoration and interior design improvements were completed in time for the 2005 Galveston Historic Homes Tour.  When Hurricane Ike struck Galveston in September of 2008, even though there was two feet of water in the yard surrounding the house, the living area sustained no damage and by the spring of 2009 the grass was green, the two live oak trees were putting out new leaves, and the gardens were in full bloom.

There are efficient windows major from these two locations onto the verandah where fresh West sea breezes are sensed. The house initially had nine windows, seven of them starting onto in the balconies.

I like this home which is remodeling by the town sends involved a new top, ending in of the first and second tale back again verandas to offer extra areas, and the structure of a new three car storage area to change the decrepit buggy home.

Every house has a story to tell, and yours is a master storyteller. The house is definitely great when it comes to aesthetics. If you'd be so kind as to add more pictures, especially of the interiors, so we can admire it more, I'd be most grateful. Thank you!

Excellent article, I was impressed of your post because of the vivid description you provided. I would be more happy if there are more pictures displayed. Anyhow the picture above shows a pretty house so I can expect that the inside is as much beautiful as the outside.